Sunday, October 6, Salvation Army supporters and volunteers celebrated the 20th anniversary Teddy Bear Tea. The annual event, planned by The Salvation Army Women’s Auxiliary Board in Anchorage, was started as a fun new idea to fundraise for local Salvation Army social service programs. Since then, the event has flourished with teddy bear artists, event volunteers and attendees. 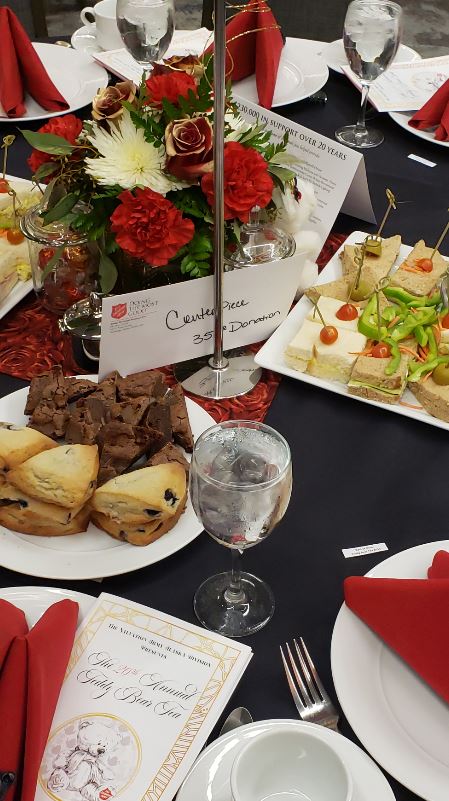 At the event, attendees enjoyed a traditional English High Tea with a variety of artisanal teas donated by The Spice and Tea Exchange of Anchorage with an array of delectable desserts and tea sandwiches. Over 150 teddy bears hand-dressed by local volunteers with themes such as Cultures Around the World, Bears at Work and Bears at Play were sold in silent and live auction bidding during the affair. Over $10,400 was raised at the event through the bidding of the creatively dressed teddy bears. 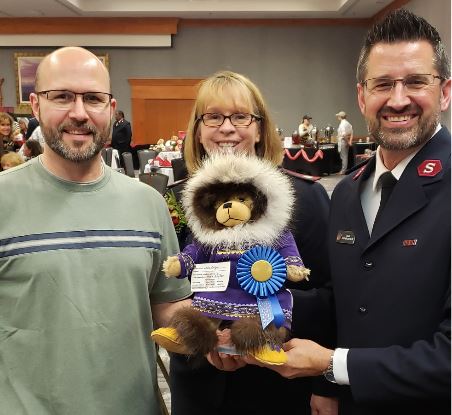 Volunteer artist, Leda Cruger of Fairbanks dressed the Best in Show winner, “Parkie Bear.” Cruger said she sure enjoyed putting the outfit together after her friend, a fellow teddy bear dresser, reminded her a few times to get started. Cruger’s Parkie Bear was adorned with a beautiful purple parker with an arctic fox fur ruff, gold embellished trim and a pair of moose hide moccasins with matching beaded purple flowers. Parkie Bear was sold in the live auction with donated furs from the Alaska Fur Gallery.

In light of the 20th anniversary of The Salvation Army Teddy Bear Tea, the event’s annual master of ceremonies, Sheila Balistreri, was honored with The Salvation Army’s Others Award. The “Others” Award honors an individual or organization exemplifying an extraordinary spirit of service to “others.” Balistreri was recognized for her commitment of over 20 years of volunteerism and support of The Salvation Army’s mission to meet human needs in His name without discrimination.

“It has been an honor serving Alaskans and working towards helping the programs of The Salvation Army succeed,” said Balistreri in a heartfelt speech during the event which proceeded with a standing ovation.

During the tea, program directors spoke about the challenges The Salvation Army has faced in the past year and how donated dollars have been put to good use to help support those in our community who need it most.

“The amount of support The Salvation Army has received from community members is evident through the care we are able to provide to Alaskans through our local social services programs,” said Major Pamilla Brackenbury, Divisional Director of Women’s Ministries and Program. “It was a wonderful event turnout and we could not have done it so successfully without our teddy bear dressers, supporters and event sponsors.”

To learn more about The Salvation Army and how you can help Fundraise for Good, visit alaska.salvationarmy.org.