Sitka officers are able to offer a helping hand after receiving an unusual request for assistance.

Sitka Salvation Army officers, Majors Sabrina and John Tumey recently found themselves with a unique request on their hands. A member of their community named George found himself in a difficult situation as he was falling behind financially and simply could not get caught up with his bills.  The assistance he requested was a little out of the ordinary for the officers as it was for an atypical residence. George's home was a boat and was now in danger of being evicted from it's docking slip by the harbor master. He had been unable to meet the docking fees and without this spot, George would not have a place to safely anchor his home. The harbor master was also troubled about this concerning situation as he mentioned he would "never want to evict anyone," but said, "it does unfortunately happen sometimes."

The Tumey's learned that George had served our country and was a veteran of the United States Army. So, now seemed the right time to return the favor and serve him during his critical time of need.  Major Sabrina Tumey shared, "The Salvation Army in Sitka was able to give George a hand up," providing the assistance he needed to get things settled with the harbor master, as well as give him food provisions and other necessary supplies.  He is happily able to report to the Majors that he is able to keep up now.

Because of the generosity of our donors, The Salvation Army is able to give the continued help that is needed for those who are facing difficult circumstances like these. Our donors enable us to show Love Beyond Crisis. 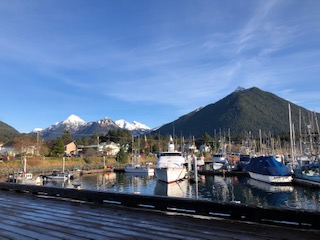